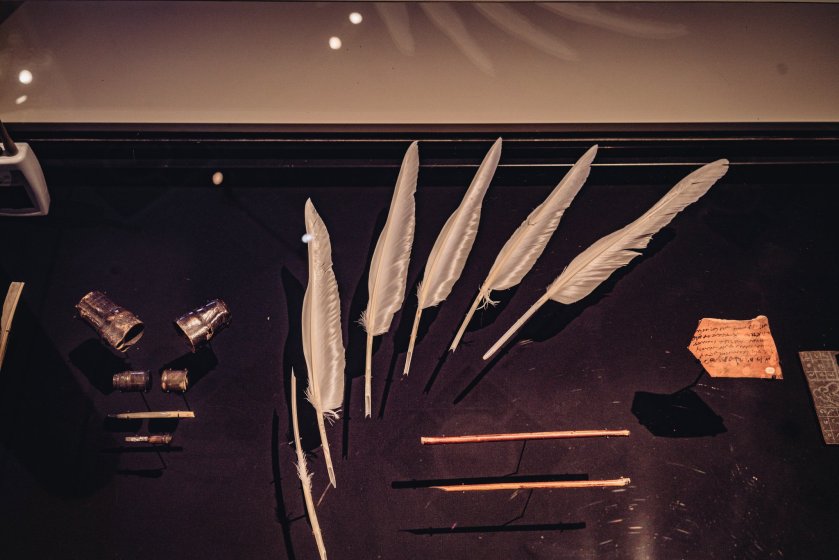 LONDON — The writing’s on the wall, we’re told. Whether it was Johannes Gutenberg’s printing press in the 15th century, the invention of the typewriter 300 years later, or the emoji of today’s smartphones, the act of writing seems to be forever on the precipice of extinction, without quite falling off.

“Writing has never been static,” said Adrian Edwards, a curator at the British Library who put together the exhibition “Writing: Making Your Mark,” which runs through Aug. 27. “The marks we make on the page have always changed and developed in ways in tune with our needs,” he added.

“I think writing’s going to be around for quite some time to come,” Mr. Edwards said.

With 120 objects that represent 44 different systems of writing from the past 5,000 years, “Writing: Making Your Mark” examines the intriguingly similar past, present and future of writing, showcasing a Mesopotamian tablet that has an early form of cuneiform worked into its clay, an ancient Egyptian monument covered with hieroglyphs and the ink-stained, slightly damaged quill of the poet Alfred, Lord Tennyson.

The sheer breadth of the show suggests that writing will most likely never go away, even as new technologies change the definition of what it means to write.“The marks we make on the page have always changed and developed in ways in tune with our needs,” said the exhibition’s curator, Adrian Edwards.

And what does it mean to write, exactly? For one, writing is fundamentally an act of thinking. It would be wrong to define writing exclusively as the act of putting words onto a page, because it is ultimately about the conception and transmission of thought.

Surely, John Milton, who wrote “Paradise Lost” after going blind — he dictated it to his daughters — was still a writer, even though it was not his own quill touching the page. The same goes for Jean-Dominique Bauby, who suffered from locked-in syndrome, but managed to write “The Diving Bell and the Butterfly” by blinking when an assistant read out letters from the alphabet.

“In the past, the well-to-do often employed a scribe to do their writing for them,” said Nick Bostrom, the director of the Future of Humanity Institute at the University of Oxford, “which is not so different from using an A.I. speech-recognition system.”

Modern forms of writing can be frightening in their speediness and apparent thoughtlessness, but what we find most disturbing about writing’s latest iterations — like someone quickly drafting a message with autocompleted sentences and looped GIF images on their smartphone — is the apparent lack of care involved. A video in the exhibition wonders how we might wish someone “happy birthday” decades into the future. Already, today, many of us simply see a birthday on Facebook and toss out a “like” or WhatsApp a hasty “HBD!”A large Mayan limestone stele with writing from Belize, from the seventh century A.D.

“The vital signs aren’t good,” said the futurist Richard Watson, the author of “Future Files: A Brief History of the Next 50 Years” and a lecturer at Imperial College London. “We don’t really write anymore, we just type. We just thumb through a stream of consciousness.” Writing on paper by hand, he said, “is so very different to typing or texting on a screen. It’s slower, deeper, more reflective, more real.”

To be fair, though, even typing comments on Instagram or adding text to Snapchat requires a series of judgments. The difference is that these decisions have limits: There’s a controlled amount of space, and if using emoji, a restricted number of symbols. Alphabets throughout history, from the Phoenician to the Roman, have fluctuated in what they have allowed their speakers to convey. Emoji, in this sense, are nothing new.

Read the rest of this essay at The New York Times