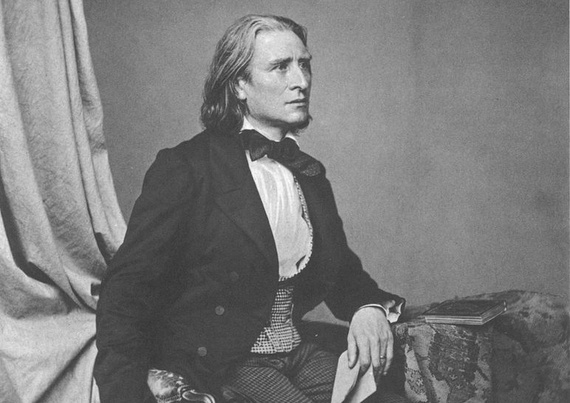 Studies show that musical ability might be a sexually selected trait.

On a snowy day in Berlin, two days after Christmas 1841, Franz Liszt strode out onto the stage at the Berliner Singakademie concert hall. He sat at his grand piano in profile, beads of sweat forming on his forehead. He was 30 years old, at the height of his ability, and he was about to unleash a mania—a mania not in the sense of “Beatlemania,” or any of the other relatively mild musical obsessions, but a mania viewed as a truly contagious, dangerous medical condition that would affect women in Germany, Italy, France, Austria, and elsewhere.

Using his whole body—his undulating eyebrows, his wild arms, even his swaying hips—Liszt dove into Händel’s “Fugue in E minor” with vigor and unfettered confidence, keeping perfect tempo and playing entirely from memory. It was the start of the phenomenon later called “Lisztomania,” and the women in the audience went mad.

They fought over the kerchiefs and velvet gloves that he theatrically tossed out at the end of a performance, made bracelets out of his broken piano strings, and vied for locks of his famously long, flowing hair when he exited the concert hall, as recounted in Alan Walker’s Franz Liszt: The Virtuoso Years.

In fact, obsession over absolutely everything related to the prodigious pianist was so great that, as Walker writes, “Liszt once threw away an old cigar stump in the street under the watchful eyes of an infatuated lady-in-waiting, who reverently picked the offensive weed out of the gutter, had it encased in a locket and surrounded with the monogram ‘F.L.’ in diamonds, and went about her courtly duties unaware of the sickly odor it gave forth.”

The German critic Heinrich Heine, who coined the term “Lisztomania,” further explained in a review of the 1844 Parisian concert season just how much effect the charming musician had on his audience.

“And yet, how convulsively his mere appearance affected them!” Heine wrote. “How boisterous was the applause which rang to meet him! … What acclaim it was! A veritable insanity, one unheard of in the annals of furor.”

Germany had gone gaga for Liszt. But why? Such madness is rarely pointed towards classical musicians. (Beethoven’s signature scowl and Chopin’s soporific nocturnes couldn’t quite match Liszt’s level of charisma and charm.) Even rockers haven’t experienced this kind of mania save for perhaps Jimi Hendrix, Mick Jagger, Elvis, or perhaps, One Direction’s Harry Styles (who has caught his fair share of female undergarments on stage). Yet Liszt has always held a special place as the first musician to inspire serious feminine adulation.

“He was a terrific showman, had very theatrical gifts, and he was an exaggerative, demonstrative player who was also a fabulous improviser,” says Leon Botstein, music director and principal conductor of the American Symphony Orchestra. “Arguably, he was the greatest pianist in history.”

It was this excellence in his craft—what the ancient Greeks would call arête—that perhaps most motivated Germany’s Lisztomania. From an evolutionary standpoint, Liszt had made himself appear to be an incredible mate.

“When you’re able to display that you have the time and resources to perfect your ability, then that ends up being attractive to a potential mate,” said Petr Janata, an associate professor of psychology at the University of California, Davis, who specializes in the neuroscience of music. The thinking is that “if you can take care of yourself and learn a skill like music, then you can likely take care of a mate. With bird songs, for instance, there’s a pretty clear link between the quality and complexity of the song and reproductive fitness.”

Charles Darwin hypothesized that musical skill led to better mating options not just for birds but for humans, as well. “Musical notes and rhythm,” he wrote in The Descent of Man, “were first acquired by the male and female progenitors of mankind for the sake of charming the opposite sex.”

For over 140 years, research had not been able to verify Darwin’s theory, that is until a recent study conducted by Benjamin D. Charlton confirmed that indeed, “music is a product of sexual selection through mate choice.”

But the findings come with some nuance.

Charlton and his fellow researchers at the University of Sussex found that women in the middle of their menstrual cycle—at their most fertile—tended to believe men with strong musical abilities carried better genes than men without that skill and thus preferred them as mates. For the study, 1,465 women listened to four different piano compositions of increasing levels of complexity and were asked which composer they desired most.

Women who were not at a point of peak conception were generally ambivalent, not preferring a single composer over another, but those who were on days six through 14 of their respective reproductive cycles overwhelmingly preferred the composer of the most complex song.

Yet, this preference was only for short-term relationships, implying that women wanted to quickly procreate with skilled musicians but weren’t necessarily in it for the long term. Musical skill, in other words, may be more advantageous for a flaky lothario than a man looking for a stable, picket-fence life.

It seems that thanks to evolution, a well-handled violin is somewhat like a sharp suit or a high-paying job. An earlier study in Evolution and Human Behaviorfound that women tended to sit closer to the stage at classical music concerts than men. They also sat closer to the musicians who were ranked by the researchers to have the greatest levels of skill.

But if music has this much power over sex and love, what does that mean for relationships? If attraction can be determined by something as seemingly arbitrary as musical skill, then what is the value of big-ticket characteristics like kindness, morality, faithfulness, or dependability? Musical skill, it turns out, can be a relatively good marker of these other traits, too. That’s because when looking for a partner, we tend to make snap judgments, which often turn out to be accurate, based on small details and behaviors—a concept first outlined in Malcolm Gladwell’s Blink.

It may seem silly that something as insignificant as skill or taste in music could have such a strong effect on relationships, but it makes for a simple way to both identify yourself and to quickly size up someone else’s compatibility. To become a great musician takes time, resources, tenacity, focus, and a host of other traits. Thus, a skilled musician has already taken a shortcut past having to prove all of the aforementioned qualities individually.

Musical taste is likewise informative. Take, for instance, the question, “What type of music do you listen to?” It’s seemingly innocent, but it is extremely loaded, too, full of subtle questions meant to reveal underlying preferences that would be distasteful to ask about in a straightforward manner.

For example, if someone proclaimed their favorite band to be Vampire Weekend, you would likely assume that they are financially stable, somewhat bourgeois, college-educated, liberal, secular, slightly but not entirely conformist, born in or living in an urban area, etcetera. (Either that, or that is what they want you to think by claiming Ezra Koenig’s indie band as their favorite.) Whereas, if someone responded, “Tim McGraw,” you could glean that they might be from a rural or suburban environment and are likelier to be politically conservative.

These are not ironclad identifiers—I’m entirely sure that somewhere there is an atheist rocket scientist with three PhDs living in London who rocks out to Tim McGraw and Brad Paisley at home—but people rely on them in a pinch. A study at the University of Texas at Austin backs this up, finding that music taste tightly correlates with traits like political orientation, verbal ability, even athleticism.

Unlike some other forms of art like literature or film where one must follow a character’s development throughout a narrative, music works quickly, delivering emotional punches and catharses rapidly and efficiently. Thus a skilled musician has the advantage of gaining immediate access to the feelings of his or her audience.

At first Heine, the German critic, thought Lisztomania could be ascribed to Germany’s political conditions: Liszt’s music gave the people an outlet for their frustrations. But then he changed his tune. “I was wrong,” he wrote in the 1844 concert review. “This was truly no German-Berlin-sentimental, fake-feeling public before which Liszt played all alone.”

He began to conclude that the audience’s raucous applause, their pure physical excitement was due not to external socio-political conditions, but to something within the body, determining there was some “electrical effect of a demonic nature” acting on the audience.

Another concertgoer recorded his experience of Liszt’s favorite closer, the exciting “Grand gallop chromatique,” in a March 1842 edition of Konigliche Preussische Staats- Kriegs- und Friedenszeitung (The Royal Prussian State War and Peace Newspaper). He came to a similar conclusion to Heine’s, writing, “[The audience underwent] frenetic enthusiasm stemming from disturbances pressed on the nervous systems.”

But to conclude in the modern age that the romantic power of music comes from a frenzied tempo or some neurological “electrical effect” acting on the audience would be “nonsense,” says Botstein, the symphony conductor. Rather, the main reason extraordinary musicianship is so attractive is that it rapidly demonstrates a variety of positive evolutionary traits.

Liszt was known for his great improvisation, for the way he could lead his audience through a musical narrative, creating characters through unique musical gestures. But his fans weren’t just going weak in the knees for the way he commanded a piano, but also because they had made a positive judgment about his reproductive fitness. Lots of musicians would later discover this, but Liszt was arguably the first to figure out how attractive musicianship can be.

Plus, you can never rule out the power of that hair.

© 2014 Cody C. Delistraty, as first published by The Atlantic.