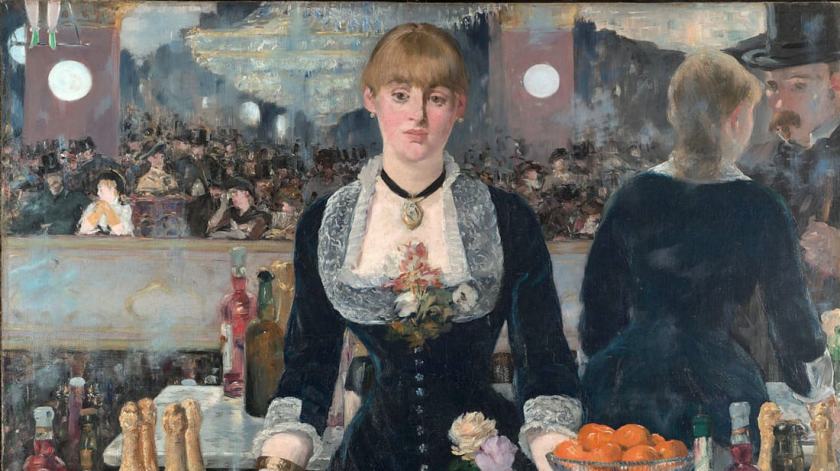 Edouard Manet‘s notion of beauty changed starkly near the end of his life. Who determines what is or isn’t beautiful? And why are we so drawn to it?

The halo effect is a type of cognitive bias in which your initial superficial assessment of a person influences your perception of their other, more ambiguous traits. In the name of cultural journalism, I conducted an informal experiment to test this. I posted five different photographs of myself to a website called Photofeeler, which people mostly use for their acting headshots, company photographs, and online dating profiles. Strangers vote on your attractiveness, trustworthiness, and intelligence, and, using a weighted algorithm, the website tells you the percentile you’re in compared with the rest of the people on the website so you can choose the best photograph. The photo of mine that was voted the most attractive—my fingers awkwardly crinkled around a wineglass on a terrasse—was the one in which I was voted smartest and most trustworthy. The photograph in which I was deemed ugliest—sitting in a cab—was the one in which I was voted dumbest and least trustworthy. In every photograph, my perceived attractiveness determined my perceived trustworthiness and intelligence, traits that, of course, are impossible for anyone to actually know from a picture.

The notion of the halo effect and the idea that “beauty is good”—meaning that we assume people who are prettier must also be cleverer, kinder, more moral than uglier people—were first tested in 1972 by the psychologists Karen Dion, Ellen Berscheid, and Elaine Walster. They found that people almost uniformly believed that those who they found more attractive on the basis of three small photographs were also more generous and more stable and had better marriages, better jobs, and better families than less attractive people. A similar study from just a few years ago found that people trust those they consider more attractive significantly more quickly than those they consider less attractive.

Is beauty, therefore, the most useful trait one might have?

From the amount of money people spend on skin care, makeup, haircuts, clothes, and the like, it seems that we may have already subconsciously accepted this as a truth.

In his Essays, Montaigne took stock of the ancients’ wisdom and his own experiences and concluded the same: there is no more persuasive and influential trait than beauty: “I cannot say often enough how much I consider beauty a powerful and advantageous quality,” he wrote.

Socrates called it “A short tyranny,” and Plato, “The privilege of nature.” We have no quality that surpasses it in credit. It holds the first place in human relations; it presents itself before the rest, seduces and prepossesses our judgment with great authority and a wondrous impression.

Beauty circumvents our logic. It “prepossesses our judgment.” Against our better instincts, we succumb to the halo effect again and again. Keats bought into it (“beauty is truth, truth beauty”). Rilke was more suspicious (“beauty is nothing but the beginning of terror … it serenely disdains to destroy us”).

Is ugliness the absolute biggest setback one might be born with? Of course not. The idea that ugliness might be more of a handicap than race, gender, socioeconomic status, sexual orientation, or some combination thereof is a slippery slope toward the kinds of arguments incels and “proud boys” like to make. But looks are still a significant factor in one’s life. There’s no question that for those on the extreme side of the attractiveness scale—either very beautiful or very ugly—their lives will be fundamentally altered by their looks.The history of beauty is broken into two parts. For the ancients through the medievals, beauty was an empirical and objective concept. The belief, put forth first by Plato, was that beauty was a fundamental property of a person or an object; beauty was inherent and had been “created.”

But in his 1757 essay “Of the Standard of Taste,” David Hume undermined all this forever. The Scotsman set forth the notion that beauty is actually about perception, that the way the mind thinks about an object or person has little to do with the object or person itself. “Beauty is no quality in things themselves,” he wrote: “It exists merely in the mind which contemplates them; and each mind perceives a different beauty.” In other words, beauty is in the eye of the beholder. The only explanation for why we even discuss beauty as a trait at all is because of how it makes us feel.

Hume’s ideas about beauty fueled new ideas about art, too, many of which the Viennese art historian Ernst Gombrich explored in his hundreds of essays, books, and lectures. In his 1960 book Art and Illusion: A Study in the Psychology of Pictorial Representation, Gombrich made the Humean argument that art is based solely on perception, that there is no objective art just as there is no objective beauty.

This understanding of art—in which beauty is solely about individual perception—is what makes Édouard Manet’s final artworks so confusing and enigmatic. Throughout his forties, the French painter’s health had been suffering, and, in 1879, at age forty-seven, he began hydrotherapy treatments out in Meudon, to the southwest of Paris. The treatments weren’t taking. His doctor in the capital believed that he had a circulatory issue, which caused intermittent paralysis in his legs and pains throughout his body so severe that he often had trouble sitting up. What he actually had, as would be later discovered, was locomotor ataxia, which made him unable to control his bodily movements or to feel his arms and legs. It’s a side effect of syphilis—and a brutal one at that. He would die just four years later, unable to stand for more than an hour or two, experiencing terrible, constant pain in his limbs.

Those final years marked a significant shift in his painting style. He reoriented how he both conceived of and depicted beauty. In his early thirties, he had taken on the massive Modernist projects of Olympia and Déjeuner sur l’herbe, questioning the very fundamentals of formalism and art history. Toward the end of his life he turned to small-scale projects—tiny still lifes of fruits, such as Bunch of Asparagus and The Lemon, and portraits of society women, such as Jeanne (Spring) and Autumn (Méry Laurent). His final project was a series of roughly twenty still lifes of flowers in crystal vases. When he painted them, he was so sick he could not stand and he could barely lift his arms.

What were these seemingly meaningless, end-of-life confections?, many critics have wondered. Most determined that he had capitulated to the comforts of prettiness. The art historian John Rewald wrote, “Manet had to fight frequently against a dangerous tendency to faire joli,” to prettify everything. “Now that he was tired and ill, an opportunity was given to him to obey his whole instinct, to capture his frequently suppressed charm and frivolity.” Jacques-Émile Blanche, a portrait painter and contemporary of Manet, wrote similarly: “It seems that, as the invalid became less able to go out, the society of lively young women of easy virtue and their lovers became an increasingly compelling attraction for him.” The art historian Douglas Cooper, in his monograph of Manet, simply called his last works “a charming diversion.”

While the Frenchman had tended to look toward historical subjects for his paintings—and, with A Bar at the Folies-Bergère, sporadically continued to do so—his end-of-life paintings were almost exclusively smaller in scale both in size and in subject matter. Floral paintings, portraits of bourgeois women—weren’t these the realms of women artists? Why is it that the artist who spent much of his life overturning expectations of vantage points, proportions, framing, even race was now expending his final brushstrokes on painting pictures of pretty women and flowers?

It wasn’t until a feminist mode of art history came into vogue in the 1990s that some began to reason that Manet hadn’t been dumbing down his work or yielding to vapid prettiness; rather, he was redefining art and beauty altogether. The art historian Carol Armstrong identified the “femininity” of his works as a progression of his style rather than a surrender to his illness. Helen Burnham, an art historian and curator, saw his interest in fashion as an epitomizing depiction of modernity, a way for him to make grander points about French society.

Manet was widening the definition of beauty. He was reinventing his own style while using otherwise superficial beauties to fight his illness, his depression, his existential dread. Beauty, he knew, was not something that could be determined by critics or gallery-goers. It was whatever he wanted it to be. And what he wanted was an escape.

“His heightened interest in pretty parisiennes, the still lifes of fruits and flowers … all of these show the ailing artist’s passionate attachment to the delicate beauties and fleeting pleasures of this world,” writes Scott Allan, one of three cocurators of “Manet and Modern Beauty,” which is currently on at the Art Institute of Chicago. “Manet’s last works are among the most gorgeous and vibrant he painted but also, given his personal circumstances, the most poignant, and they reveal a more intimately human side of an artist so often lionized as one of the great heroes and rebels of modern art.”

Beauty, Manet seemed to be saying, can be a philosophy in and of itself. Does looking at these flowers ease your pain, too?, he seems to ask.

The viewer, as Hume reasoned, determines what is beautiful. Even the creator of the universe understood this relative nature of beauty, as brilliantly pointed out by Ken-ichi Sasaki, a professor of aesthetics at Nihon University in Tokyo, in his essay “Politics of Beauty.” After God creates the world in six days, he stops and looks at it in order to deem that “it was very good.” One might think that, for God, the beauty and the goodness of the world would be predetermined, that these traits would be a given. But God needed to take a second look at his creation in order to determine its aesthetic and moral quality. He needed not just to create its beauty but to perceive its beauty as well. “Beauty cannot be determined a priori with concepts,” Sasaki writes; “it needs always to be verified a posteriori. In other words, beauty is not made but given.”

Those who criticized Manet’s final works could not see past their own limited definitions of beauty. The macho critics thought of beauty as necessarily including grander meanings or art-historical significance. When their expectations were not met, they classified Manet’s works as superficial, as ultimately pointless other than as his coping mechanism.