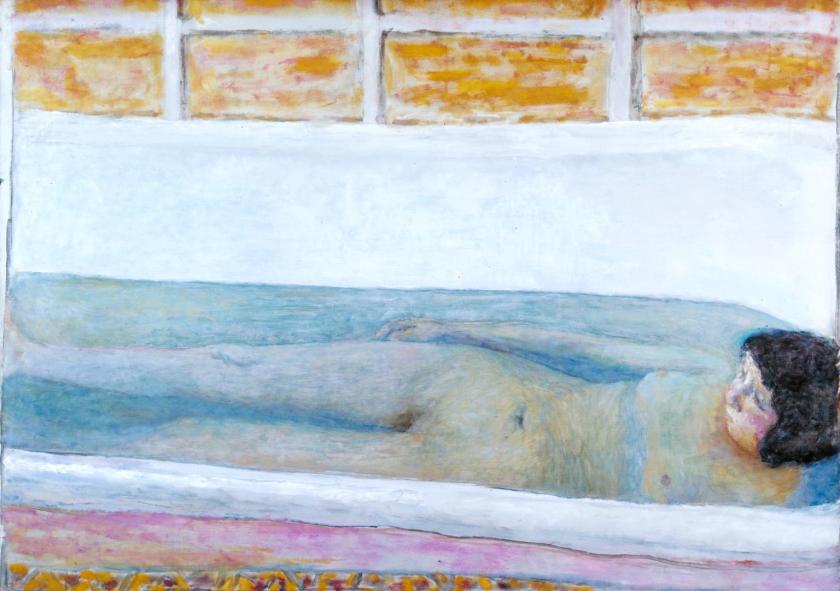 Pierre Bonnard’s revolutionary and controversial use of color became a means toward unlocking his past and the truths of his own self. But what if, ultimately, there was nothing to find?

For years, Pierre Bonnard juggled the love of two of his models. The women were Marthe de Méligny, who would eventually become the artist’s wife, and Renée Monchaty, who would kill herself in spurned grief. In Young Women in the Garden, Bonnard painted them both. They are in a bourgeois backyard garden, like something out of a Renoir or Manet, at a large table adorned with a basket of fruit. Monchaty is the focal point of the scene. She sits in a chair, turned toward the viewer; her head rests innocently in her hand. She appears contented, at ease. In the bottom corner of the scene, looking not at the viewer but toward Monchaty, De Méligny looks quietly bemused, her profile nearly cut out of the frame.

Bonnard ultimately left Monchaty for De Méligny. Sensing that his marriage to De Méligny was imminent, and that his affections were fading, Monchaty fatally shot herself on her bed. More sensationally, another version has it that Monchaty slit her wrists in the bath so that Bonnard would arrive to find her dead. Whatever the case, Monchaty’s suicide was one of the central definers, tragedies, and regrets of Bonnard’s life.

Bonnard lived with De Méligny for close to fifty years, and he painted her for longer. Even after she died, he conjured her from memory on his canvas. Five years after she’d died, he depicted her just as he had before. Here she is applying makeup at her toilette or soaking in the tub, still alive on his canvas. Bonnard portrayed her nearly four hundred times, but there is not a single portrait in which she is clearly shown. In Young Women in a Garden, she is cut partially out of the scene. In the numerous paintings of her lying languidly in a tub or walking about nude or in a towel or sitting in the sunroom, she is defined by the light striking her; it mystifies her, confuses her. If her face is shown at all, its particulars change frequently. It is only her body that stays the same, though sometimes even that begins to disappear. In Bonnard’s representations, De Méligny is hyperflexible, almost boneless, her form like that of a ghost. She looks about thirty years old in every painting, whether she was twenty-five or seventy or dead at the time. De Méligny, unlike anyone else Bonnard painted—besides, perhaps, himself—existed in the ethereal space of Bonnard’s own memory. His wife was the vehicle through which he could remake his past. Perhaps, these paintings seem to say, Monchaty never did commit suicide because of him. Here is the evidence: a beautiful, phantom woman is enjoying the silver-blue waters of a bath right here. This is the present and the future; with sufficient will, the past might no longer have power.

How do any of us make sense of our past? Bonnard’s past was particularly messy: a former lover’s suicide and a wife whom he never seemed to know fully. “How can we live without our lives?” wrote Steinbeck. “How will we know it’s us without our past?” “Pierre Bonnard: The Colour of Memory,” currently up at the Tate Modern, is a retrospective that looks mostly at his work from the turn of the twentieth century and beyond. Paintings by fauvists like Matisse, as well as photographs of Bonnard, round out the show. (The best photograph of Bonnard is of him with one of his six dachshunds, Poucette, a name which translates to something approaching “Thumbelina.”) The central takeaway from the exhibition is that Bonnard’s fervent, inventive, sometimes bizarre use of color in his mid-t0-late career was his solution to piecing together his broken past. Two years before he died, Bonnard returned to “Young Women in the Garden.” The last time he’d touched the painting had been in 1923, when both De Méligny and Monchaty had been alive. Now, twenty-two years later, on the precipice of his own death, he changed an aspect of it: he painted the ground a dirty, golden yellow. Bonnard had begun using yellow in a mode similar to Paul Gauguin and Vincent van Gogh. In Gauguin’s Nevermore, yellow becomes the color of escape—to other rooms, to dreams, to alternate realities. The painting is of a Tahitian woman that combines an inverted posing of Edouard Manet’s Olympia with references to Edgar Allan Poe’s “The Raven.” But it is the colors of the room that were of greatest interest to Bonnard: the room is composed of vibrant blues and reds, and their designs appear to be pulled from a Japanese ukiyo-e print. The woman’s head lies on the only spot of yellow in the painting. She is in a waking dream—both here and not. With the yellowing of the ground in Young Women in the Garden, Bonnard used the color as a symbol of escape. He gave the central women in his life a way out of this garden. With this change of color, he seemed to finally let them go.

Color was Bonnard’s arbitrator of emotion but it was also his arbitrator of space. For years, Bonnard painted the rooms of his childhood home; later, after he had married De Méligny, he painted the rooms of their shared home in Le Cannet in the South of France. These rooms were “analogues of human experience. They contained memories and told stories about their inhabitants’ lives and status,” wrote Nicholas Watkins in his late-nineteenth-century monograph of the artist. Bonnard’s painted rooms were separated by colors rather than walls—a bright red, for instance, might imply an indoor space and a pale blue might imply an outdoor one. With his use of color, there was no need for typical figurative structuring. Color itself would also become the subject of a piece, with the viewer meant to follow the light as it colored and highlighted space, taking one’s eyes outside of a house until, for instance, it landed on the sea so that one might feel as though he’s just flown through a dream. “It’s almost as if he’s trying to capture the mood as it passes into the past,” Matthew Gale, the head of displays at the Tate Modern, said of Bonnard’s use of color, “trying to fix it before it gets out of reach.”

Bonnard’s work hasn’t always been respected—nor is it necessarily universally respected now—and his use of color has been castigated for its supposed indecisiveness and meaninglessness. Picasso was perhaps his greatest detractor, once snapping to a reporter, “Don’t talk to me about Bonnard. That’s not painting what he does.” Clement Greenberg felt similarly—“smells permanently of the fashions of 1900-14”—but it was Picasso who was most merciless, telling a reporter:

He never goes beyond his own sensibility. He doesn’t know how to choose. When Bonnard paints a sky, perhaps he first paints it blue, more or less the way it looks. Then he looks a little longer and sees some mauve in it, so he adds a touch or two of mauve, just to hedge. Then he decides that maybe it’s a little pink too, so there’s no reason not to add some pink. The result is a potpourri of indecision. If he looks long enough, he winds up adding a little yellow, instead of making up his mind what color the sky really ought to be. Painting can’t be done that way. Painting isn’t a question of sensibility: it’s a matter of seizing the power, taking over from nature, not expecting her to supply you with information and good advice.

Picasso could not be more wrong. Bonnard was constantly changing his paintings, particularly the colors, because he was adjusting the painting’s mood. Bonnard was not responding to nature, he was responding to himself in nature and the changes he saw therein. When he painted his wife phantasmal and languorous in the tub, he was not interested in transcending what a bathtub might look like or even what his wife might look like; he was seeing his own self in her figuration, leaking out, ceasing slowly to exist. If he changed, so, too, did the image. This is why De Méligny was never depicted the same twice; she was never the same because she wasn’t herself. She was Bonnard’s shifting projection of himself. Bonnard understood that beauty is not reliable; what is beautiful one day might be rotted, decayed, destroyed the next. An addition of blue or silver was not a response to a change in the color of the water; it was, instead, Bonnard’s shifting response to his own mortality, his own regrets of his past, his own dynamic feelings.

Read the rest of this essay at The Paris Review