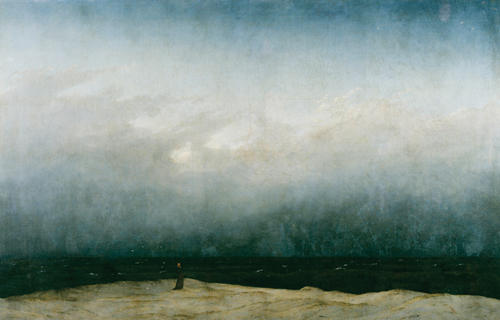 In Caspar David Friedrich’s most famous painting, Wanderer above the Sea of Fog (1818), the German Romantic artist depicts a young, aristocratic-looking man in a green overcoat as he stands atop a jagged rock, taking in a misty, high-altitude scene of mountains and cliffs. The image shows a moment of ultimate self-reflection in the vein of Immanuel Kant—a privileged man working out his interior feelings through exterior Romantic symbolism. The fog parts for him, but only just so, revealing not verdant hills and lush forests but dense mountainsides and jagged rocks. The man is at once a master of the universe and entirely subservient to it: even from high above, he can only see a challenging sliver of what he might otherwise think he controls.

Today, Friedrich’s painting has a postcard feel about it. It has been so distilled to its narrative essence of soul-searching and travel that the actual strokes, the artistic style, cease to matter. Instead, it functions as a symbolic stand-in for European Romanticism and ideals of wanderlust at large. It is a historical guidepost that acts as the hinge between the late eighteenth-century German Sturm und Drang (“storm and stress”) movement, which manifested in visual art as scenes of storms and shipwrecks representing the awesome power of nature’s irrational destruction, and the later Romantic depiction, which, as in Friedrich’s painting, with a silhouetted figure allowed the viewer to read the natural scene as representative of a subjective internal human state.

The Prussian natural scientist Alexander von Humboldt, the English poets Samuel Taylor Coleridge and William Wordsworth, and, later, the French Realist Gustave Courbet and his compatriot symbolist Paul Gauguin were all central to philosophizing, writing, or painting about travel as a way of opening up the soul. Wanderlust, to them, was inherently existential: new physical pathways opened new pathways within the mind. A geographical pilgrimage permitted a pilgrimage within the self.

“Wanderlust,” an exhibition on at the Alte Nationalgalerie in Berlin until September 16, takes on this history of travel and self-searching, showcasing a hundred and twenty works by the aforementioned artists as well as those by Pierre-Auguste Renoir, Emil Nolde, Otto Dix, and Johan Christian Dahl, among others. But with this show—with its interest in showing the clever, symbolic ways self-discovery has been depicted—it’s worth looking at the alternative value of evoking rather than depicting these feelings of reflection.

Indeed, should art be about showing a person as he experiences a feeling or about finding a way to actually create that feeling in the viewer? The time and resources involved in existential soul-searching have long been a privilege afforded only to a select few. So how, one wonders while walking through the exhibition, might art reach everyone? How might wanderlust become visceral and universal rather than selective and distanced?