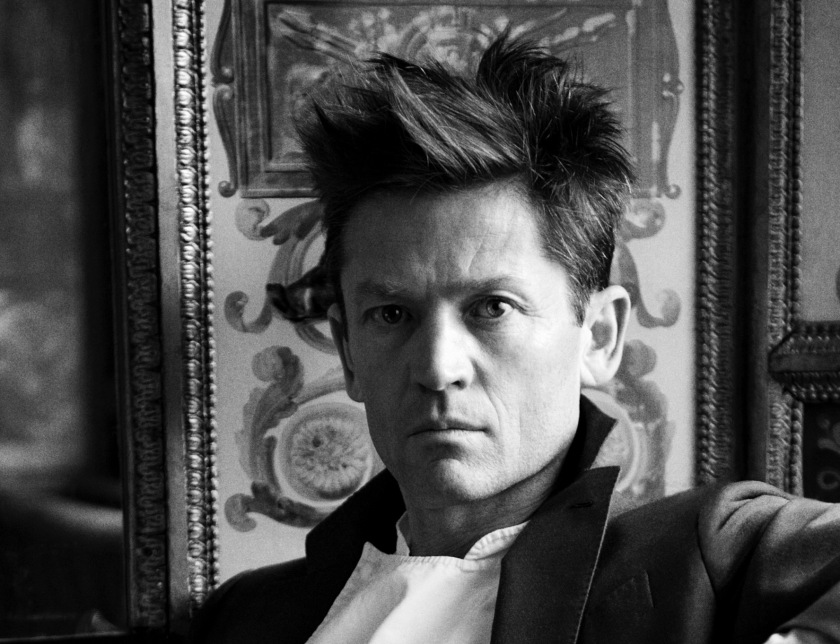 Daniel Le Bailly de La Falaise on private caterings for celebrities, the sexuality of a peach, and how the simplicity of food is the ultimate luxury.

“The most stylish chef in the industry,” according to Vogue Paris. “A fairy tale child,” according to fashion editor André Leon Talley, “straight out of a gothic novel.” The grandson of Maxime de La Falaise, a 1950s beauty who wrote for American Vogue and played muse to Andy Warhol. The nephew of Loulou de La Falaise, the afflatus of Yves Saint Laurent. The great-nephew of Mark Birley, who ruled London nightlife with Annabel’s and Harry’s Bar. And on and on.

Daniel Le Bailly de La Falaise has always had much to live up to.

Yet even from his younger years, Daniel parried the pressure with aplomb. He modeled forVogue Paris as a wispy seventeen year-old. He acted in plays on the West End alongside Michael Gambon. It was the same path of aristocratic, creative urbanity that his forebears lived so well.

But one day, he realized it wasn’t quite the life for him.

“I asked myself the question of whose career I coveted and I couldn’t really come up with the answer,” Daniel told me over the phone from Bolinas, California. “I wanted control over what my life would be and cooking was something that I had always done.”

So cook he did.

He was slated to start work at the River Café, a respected Italian eatery on the banks of the Thames, but his great-uncle Mark Birley challenged him. “If you’ve got the balls, if you’ve got balls, Danny, you’ll start at Harry’s Bar,” Daniel recounted him saying in reference to the members-only Mayfair restaurant founded by his great uncle. “He thought I’d make a week and in the end I did years there.”

Today, Daniel lives mostly on an estate near Toulouse, France, with his wife, Molly, and infant son, Louis. He manages Le Garde-Manger de La Falaise, an exclusive line of oils and vinegars sold at Selfridges in London and at Claus in Paris, and he is the author of a recent book from Rizzoli called Nature’s Larder.

But his central work remains cooking. He cooks for himself, his family, and his friends, but he also caters celebrity and fashion events, which take place mostly in Paris, London, and Milan. He catered Kate Moss’ wedding and, most recently, he was in charge of a 125-person dinner at the Château de Courances in northern France for the Olsen twins’ fashion brand, The Row.

Although Daniel’s provenance is one of sophistication and blue blood, he eschews pretension. His favorite food is spaghetti alle vongole and, as he puts it, “there is no better luxury than really distilled simplicity.”

Daniel spoke to me about the pressures of aristocracy, the sexuality of food, and what cooking for the rich and famous really takes.

You’re in San Francisco right now; you’re coming from Paris; you were born in Wales; you’ve worked in London. Where is home?

You had a modeling and acting career for a little while. Did you choose to go into cooking because you loved cooking specifically itself or because you didn’t want to be in that crazy, hostile city environment?

I went into cooking because I love cooking. My great-grandma was a great cook; my grandmother, Maxime, was an extraordinary cook; my father was a great cook. And actually the family, when we got together, which was pretty much all the time, the heart of the house was always the kitchen and that was the action of the family.

And so that’s something I grew up doing from a very early age, you know? Baking bread when I was six or seven before I was allowed near the gas flame. And also learning to garden at the same time as learning to cook. So it was that full arc from digging a vegetable to the washing of it, to preparing it, to serving it to the table. The immediacy and the vitality of food was something that we experienced from a very early age.

Can you paint me a picture of what your farm set-up is like in southwest France?

It’s a very simple place. But the beauty of the place in southwest France is the space it provides. It’s twenty hectares — fifty acres — with a charming farmhouse right in the middle on the promontory and the land has woodlands; there is a lake; it’s exposed on every side so the light works the whole way round it during the day. The land is turned over to hay meadows really just to protect the space. And then I have my herb garden.

And when I need more than herbs I reach out to my neighbors and a little further beyond. Any day of the week you can go twenty kilometers in one direction or the other and you’ll happen across the most wonderful food market. I have decades worth, more than a decade’s worth, of relationships with these people.

The full interview is online at Longreads